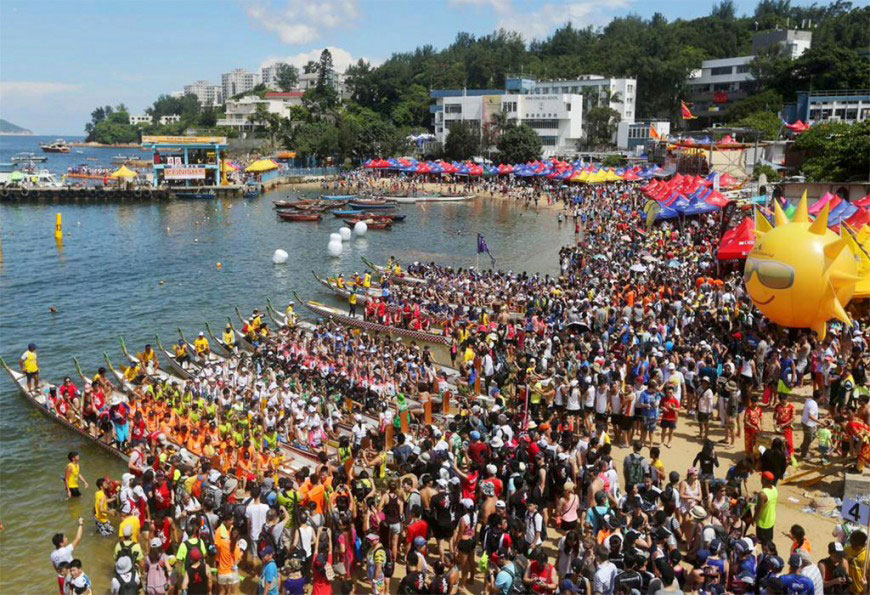 Before our first dragon boat training session I remember thinking, “Oh god, what have I done?”

If you can believe it, it was a freezing cold and very wet Saturday morning in Hong Kong and the last place I wanted to be was in the middle of Stanley Beach pretending to be Pocahontas!

But once the weather warmed up and I learned that Dragon Boat racing was the complete opposite to paddling ‘Pocahontas style,’ this ancient Chinese sport became rather addictive!

The popular dragon boat festival is held in various locations across Hong Kong and commemorates the death of a Chinese poet who committed suicide by throwing himself into a river at the defeat of his homeland’s capital.

(A bit dramatic, but he has his own festival now I guess!).

To say the day was long and intense is an understatement, but it was so much fun!

Tens of thousands of spectators lined the beach as well as partied hard on the water.

As we paddled out for our first race we passed our Aussie Association Junk Boat and waved our paddles in the air as they cheered in support. (James and I felt pretty special when we heard our friends call out our names as we moved up to the start line!).

The music was pumping and our adrenalin was racing. The start gun fired and we were off!

We raced hard, and placed really well which meant we progressed to the second heat. 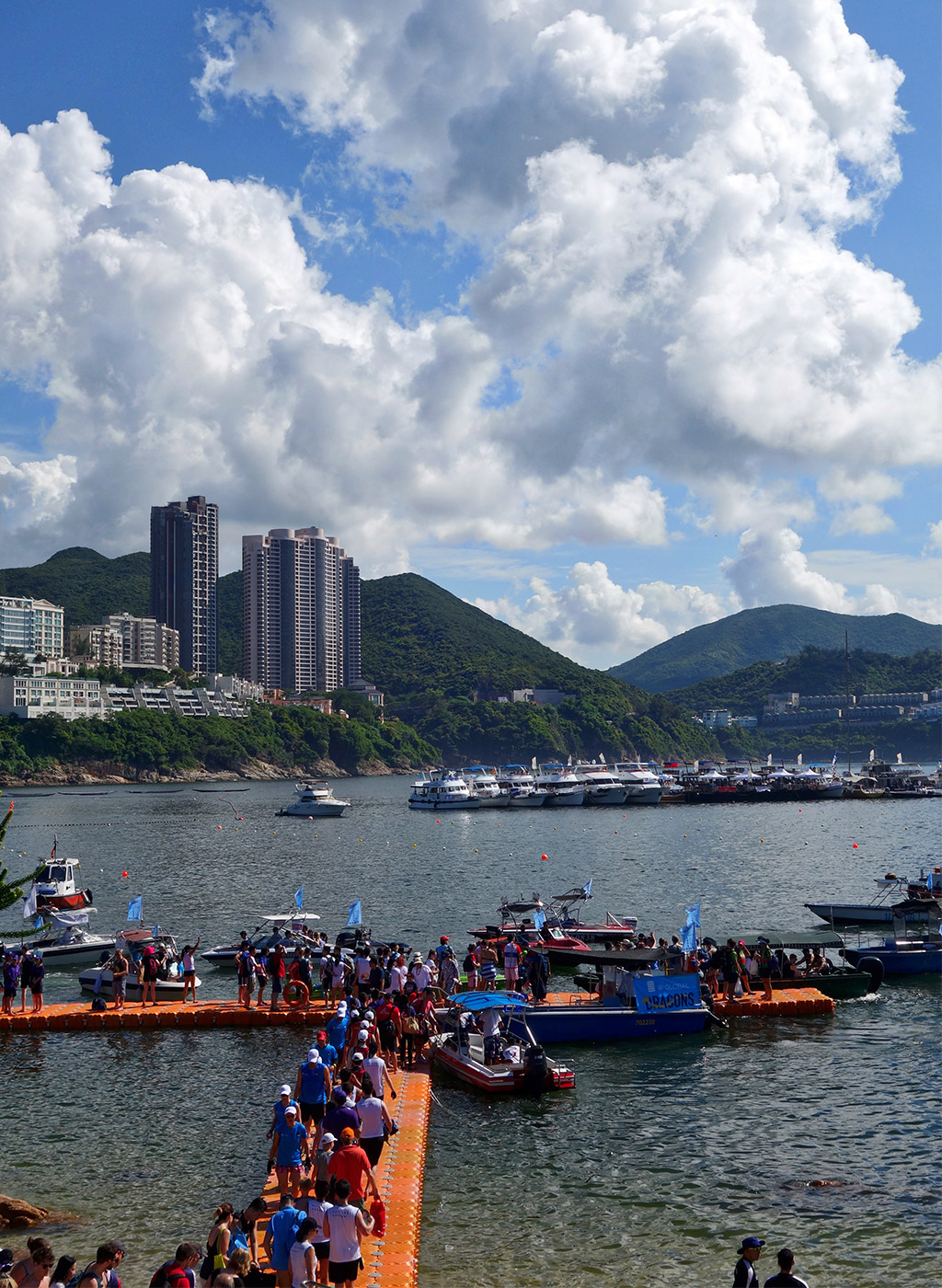 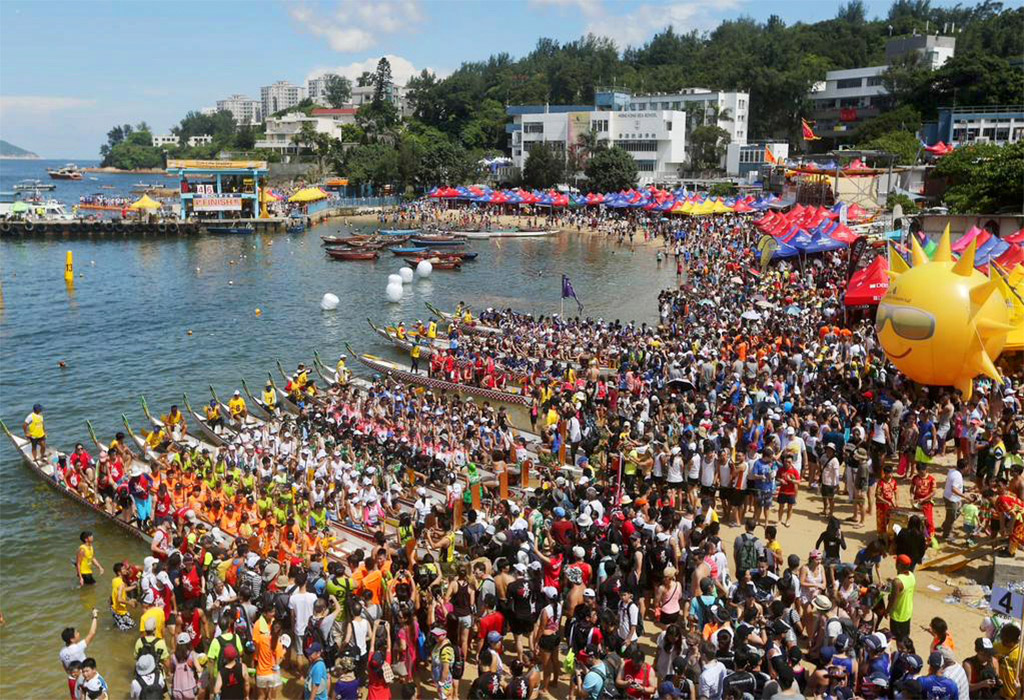 After a very long break between races, (and the odd sausage sandwich and a hydrating redbull), we took to the start line again.

In our second heat we got off to a cracking start and pretty much led the entire race. We were all surprised we crossed the finish line a mile in front of our competitors!

I must admit that the ‘winning feeling’ was exhilarating and we all joked that it had been a while since we had won something!

Constant fist pumping, high-fiving and good old pats on the back carried on until we raced in the final. 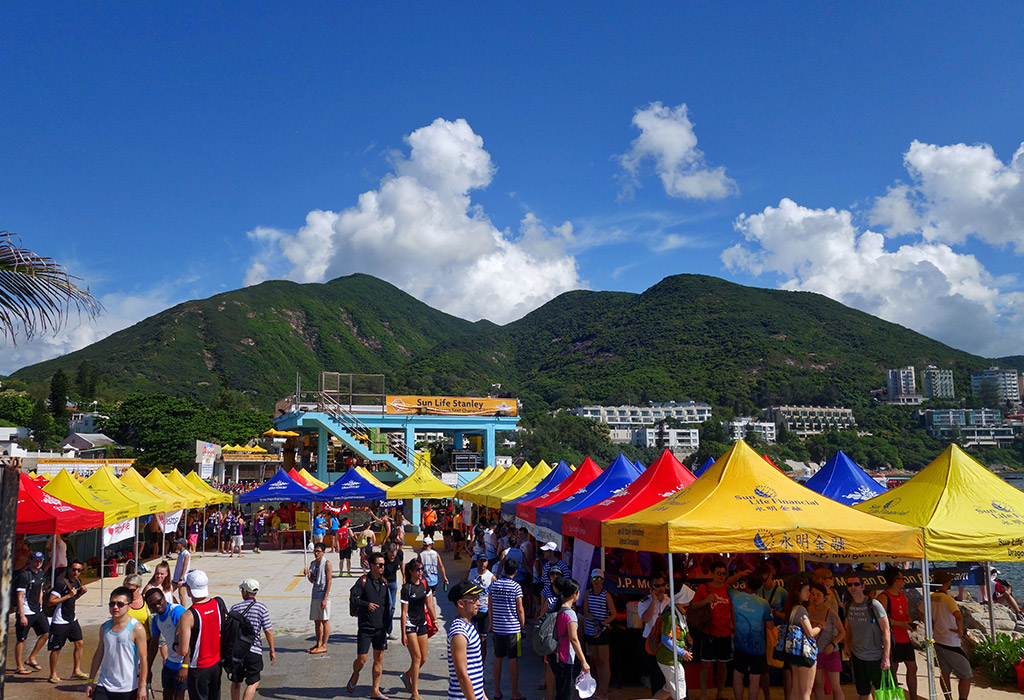 Because we had won our second race, it meant we would paddle off against all the other heat winners in the final.

Secretly I didn’t think we really stood a chance of placing. I was just stoked to be in the final!

The final race was a total blur. Paddles and white water was going everywhere. The constant pounding sound of the drummers and the crazy cacophony of the screaming crowd helped to drive us forward.

And in just 78 seconds we had crossed the line with no idea where we had placed as the race was so tight!

(As you can see below none of us knew where we had placed….except our steersman who looked pretty happy as he waved to our team photographer – gold!)

Once we had returned to our ‘Aussie Diggers’ HQ the official results were released and we were elated!

We were runners up in the Mixed Gold Plate and only lost out by 0.08 seconds! 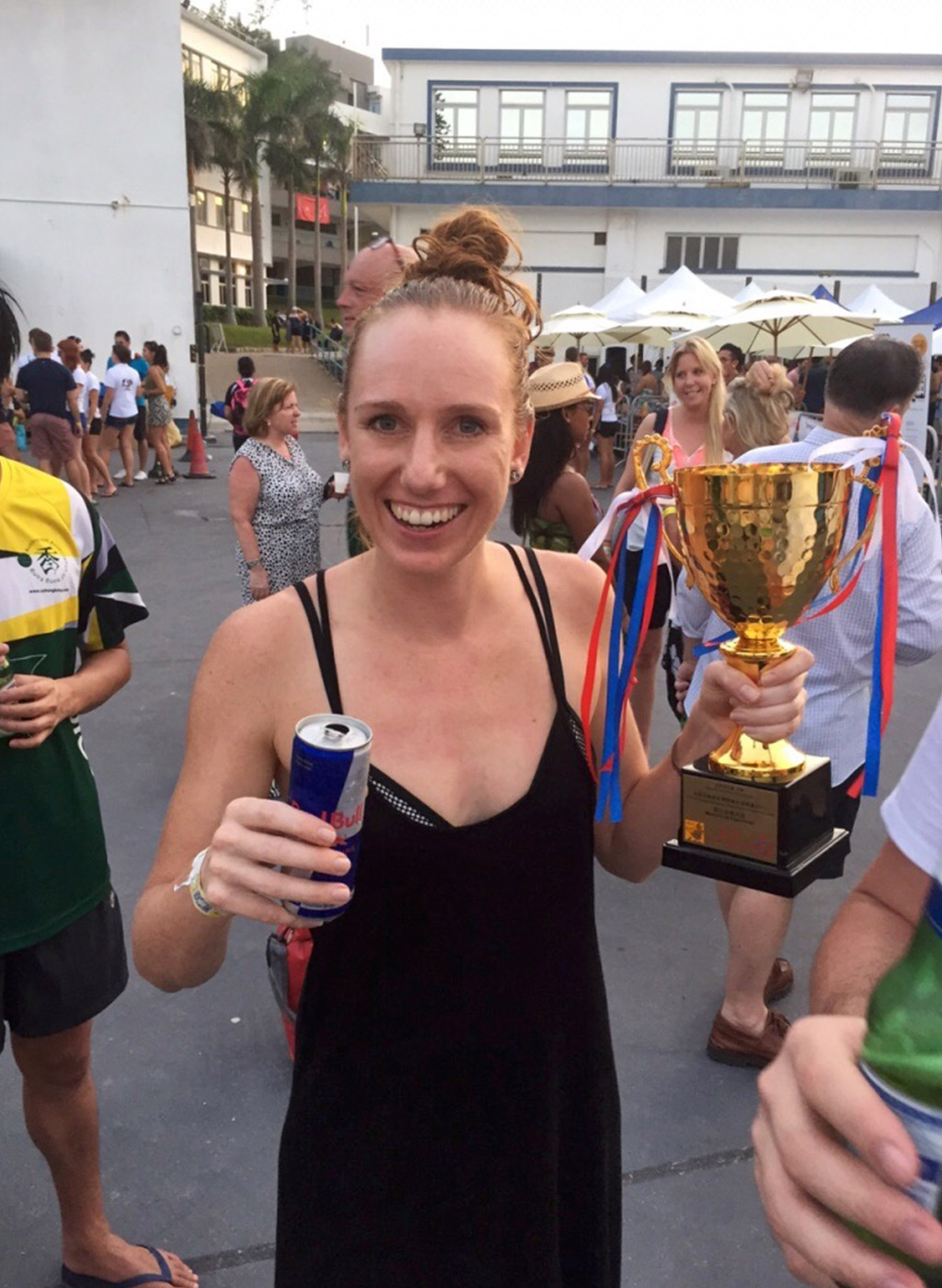 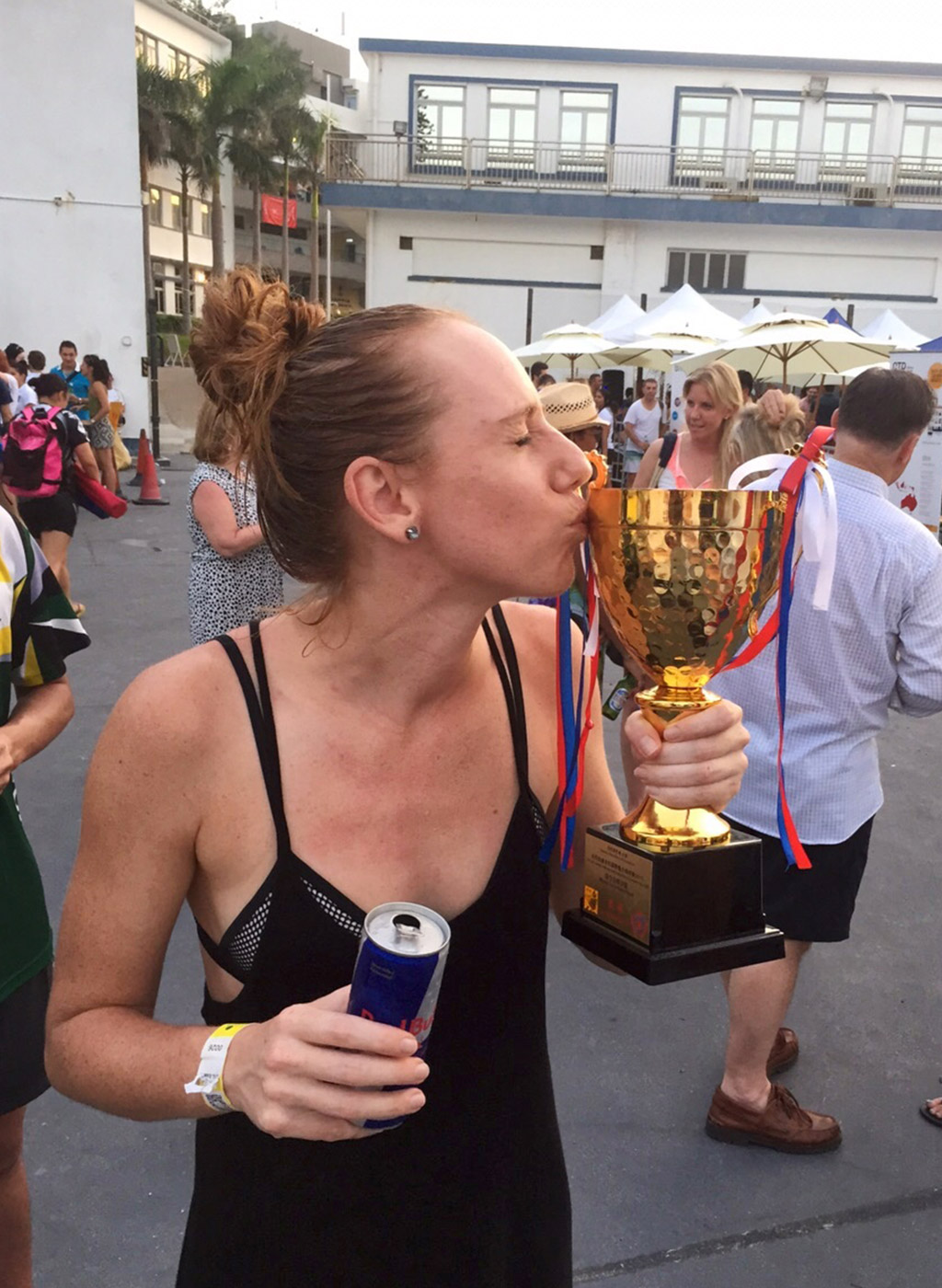 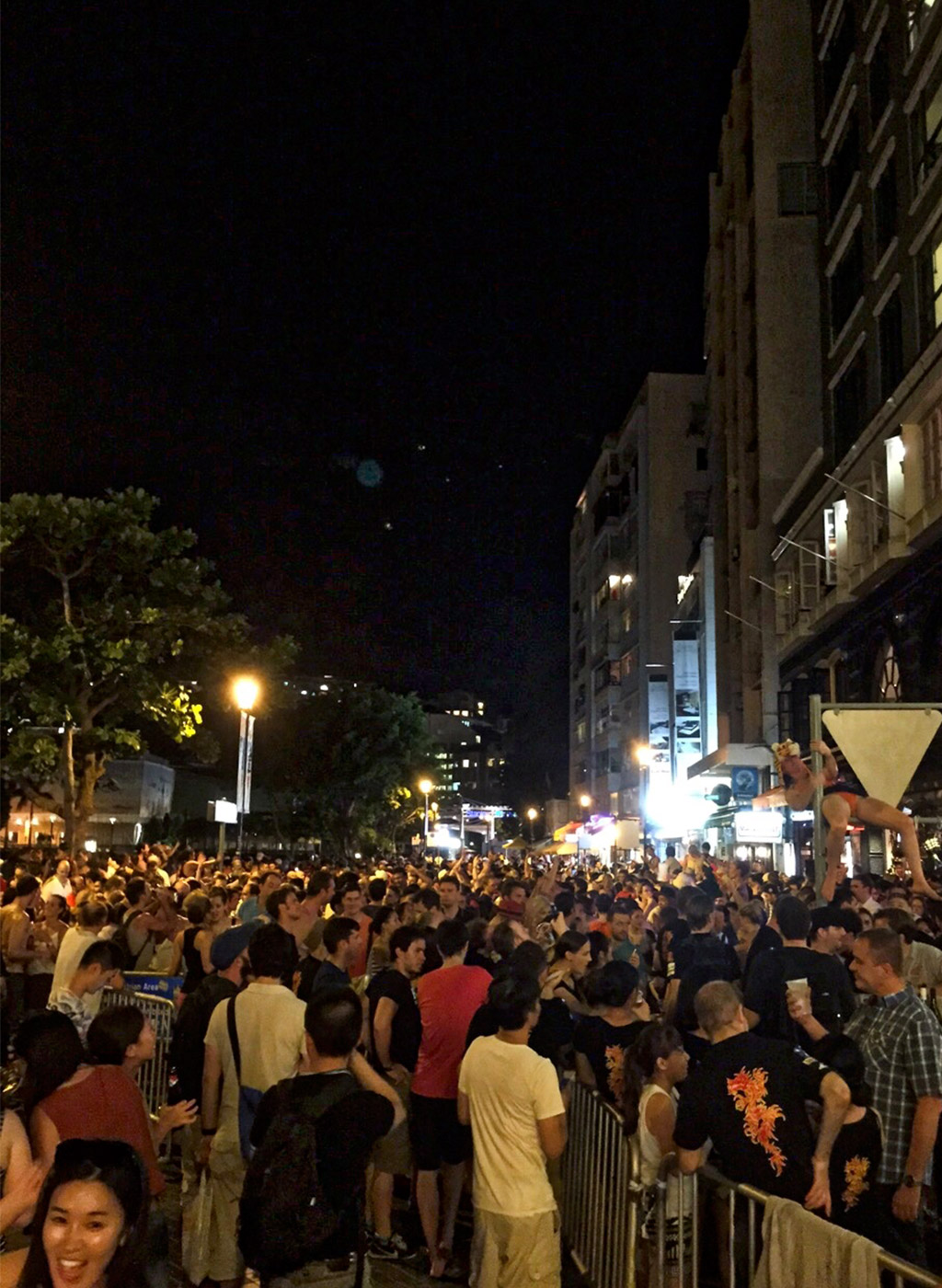 You may think ‘why would you be elated if you just missed out on winning?’

Well for a team that barely trained and had raced as a team a grand total of 3 times, our achievement was pretty spectacular.

We totally won! (And then we got to revel in the ridiculous Stanley Market Street party…..check out the chick on the street sign!).

The Dragon Boat Carnival has definitely been the best Hong Kong experience I’ve had so far and I’m extremely grateful I got to share it with my husband and such a great and eclectic bunch of fun-loving people!

If you would like to see a few other cool things I’ve done since living in Asia take a peek here!

Or why not sign up to my ‘Great Mail’ newsletter and I’ll send you a FREE copy of my e-book ‘Wanderlust’ where I’ll show you how you can turn your next travel adventure into a life changing experience – seriously!

P.S. Big thanks to our Australian Association Team photographer Simon Fuller of The 13th Element for most of these images! 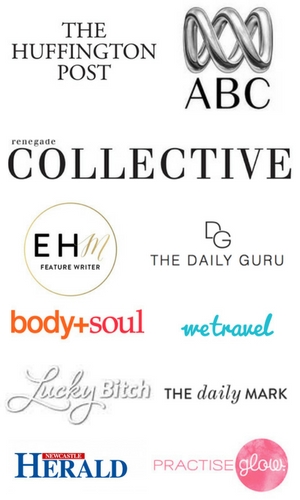 Consciously craft your perfect working week with the Pleasure + Productivity Weekly Planner.
Learn the secret to fitting more pleasure into each day while ticking off your ‘To-Do’s